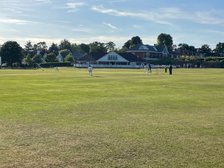 By Richard Kendall
5 days ago
Share via
FacebookTwitter
https://www.boecc.co.uk/news/1

Defeat against a very strong Esher side by 66 runs.

The 1st XI were outgunned by Premier League Esher in Round 3 of the Surrey Championship T20 Cup. Runs looked likely with a lightning fast outfield and Surrey Academy batter Krish Patel cracked an impressive 80 off just 37 balls for the hosts. This helped Esher to a mammoth 236-6, with the Bank regretting a few missed opportunities in the field.

That looked a stiff target, although Tom Day's 39 off 19 balls briefly appeared to have the opposition worried. Wickets began to fall regularly against an excellent bowling attack but Kit Winder's superb 54 provided some resistance, which included a 6 out of the ground and into the car park. The Bank eventually finished on 170-9 which was a very good effort effort against a full strength team from two divisions higher.

The full scorecard can be found here.

The Bank players did not look out of place against a talented opposition and can take confidence from that into the league campaign. The big push for promotion from Surrey Championship Division 2 starts now!